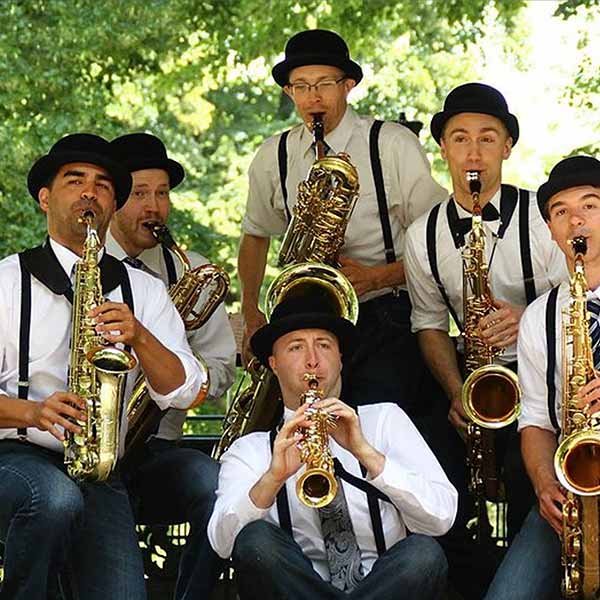 Bending genres and uplifting spirits, The Moanin’ Frogs saxophone sextet is redefining what chamber music can be. Rooted in the classical tradition and theatre of the American Vaudeville show, The Moanin’ Frogs’ spirited arrangements, creative choreography, and technically precise performances of jazz, pop, and classical music delight fans across the world.

The first touring group of their instrumentation since the early 1930s, The Moanin’ Frogs demonstrate the full line of saxophones, including bass, baritone, two tenors, alto, and soprano. This gives The Frogs a big, symphonic sound and the ability to perform both highlights from the Vaudeville repertoire and entire orchestral works with only six players. Their name, a contraction of the 1914 and 1916 hit titles, That Moanin’ Saxophone Rag and The Bull Frog Blues, also hints at their ability to hop convincingly between genres: they are at home as concerto soloists and burlesque show musicians, jazz improvisers and primo chamber ensemble players.

Recordings of The Moanin’ Frogs are regularly broadcast across the United States courtesy of Detroit Public Television. The ensemble has performed coast-to-coast, including live at the John F. Kennedy Center, as featured performers North American Saxophone Alliance Biennial Conference in IL, and in Beverly Hills, CA. In 2015, The Moanin’ Frogs made their first leap “across the pond,” touring with eight performances in and around the SaxOpen Festival in Strasbourg, France.

Committed to inspiring future generations of musicians, The Frogs recently entered into a partnership with the Conn-Selmer Division of Education, which kicked off at the 2015 Conn-Selmer Institute. Through this partnership, The Moanin’ Frogs give performances and interactive sessions with students nationwide. Topics include effective individualized practice strategies, listening and collaborating, chamber music skills, playing in multiple musical styles, and life as a professional musician. Sessions include side-by-side performances with attendees and The Moanin’ Frogs.